PAINTING > video
Lightning at our feet 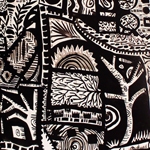 Believing
"Believing" is a 9 1/2 minute animated film that plunges the viewer headlong into a dizzying world of marks, dashes, zigzags and patterns lead by a score that is equally volatile.The gestural ink drawings, by award winning artist Laurie Olinder, were originally created as large-scale works using black ink and brush on paper, They were then filmed and edited to a compelling score composed by Bang on a Can co-founder Julia Wolfe. The combination of mark and music lead each other down a winding path, and it is in the act of believing that you are taken on a liberating journey. Believing is such a powerful word - full of optimism and struggle. It's hard to believe and it's liberating to believe.